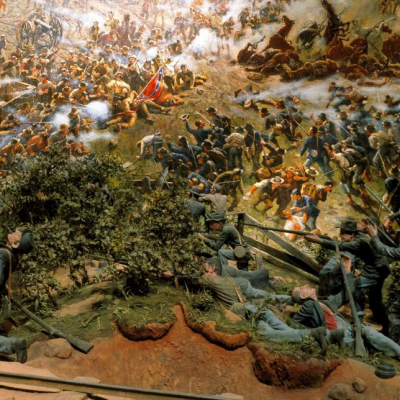 Erected out of defiance during Jim Crow and the Civil Rights Movement, Monuments commemorating the Confederacy have become controversial flashpoints for twenty-first century protest movements. Before many of them were toppled and defaced around the United States in an attempt to come to terms with the country's history of racism, one particular Civil War monument located in the former Confederacy was being restored for future generations: the Atlanta Cyclorama. Forty feet tall and longer than a football field, the circular canvas depicts a battle with over 12,000 deaths. It is a testament to the power of the Lost Cause that many regard its representation to be a monument to Confederate indefatigability when in actuality the late-nineteenth-century German artists who painted it in Milwaukee created a scene of defeat. Unlike its counterparts made of stone, the Atlanta Cyclorama has been able to withstand the passing of time through multiple acts of resignification.

During his Fellowship year at Duke, Professor Byrd will write and workshop chapters from his book project Listening to Panoramas: Sonic and Visual Cultures of Commemoration.  He will engage with faculty and students in German Studies; Art, Art History & Visual Studies; the Franklin Humanities Institute (see Story+, Remote: The Sound of Monuments and Protest); the Center for Documentary Studies; and the Wired! Lab, as well as with local artists, filmmakers, and community groups in Durham.  The year will help him shape conversations about the history and contemporary practice of commemoration.  He plans to develop models for encouraging reflection on how intersections of visual and sound studies, as well as critical race theory, help us think about the politics of commemoration in new ways.